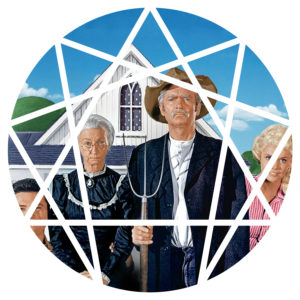 MIM Gallery is pleased to present Country Roads, a solo exhibition by Los Angeles-based artist Gabrielle Jennings. This is the artist’s first show at MIM Gallery.

• In the winter of 1969, Gabrielle Jennings’ parents drove from the San Francisco Bay area to Warwick, New York to join a community devoted to the study of G.I. Gurdjieff’s teachings.

• In the 1970’s, America’s rural population growth exceeded that of metropolitan areas—an occurrence virtually without precedent in the nation’s history.2

• G. I. Gurdjieff was an influential, early 20th century Russian mystic, spiritual teacher, and composer who taught that we lack a unified mind-body consciousness and thus live in a state of hypnotic “waking sleep.”3

• Gurdjieff’s teachings use a symbol consisting of a triangle and an irregular hexagram.4

• Gurdjieff’s method was called “The Work.” Writers, artists, and people from all professions dug wells, chopped down trees, and broke stones by day, while taking part in meetings and sacred dances by night.5

• The Gurdjieff community practiced crafts including weaving, ceramics, and batik. The ‘back-to-the-land movement was in full swing – members of the community gardened, kept chickens and goats, pickled and preserved, made yogurt and bread, and tapped maple trees for syrup.

• In 1975 Jennings’ parents took the “est” training, their marriage dissolved, and her mother moved Jennings and her siblings to Los Angeles where she watched TV for the first time.